skip to main | skip to sidebar

Date : 12th feb 09
Point Of Cast : Yishun Dam Off Yishun Ave 1
On The Hook : Live & Dead Prawns & Kelong Sotong
Tide : 3.3m (12.30pm)
Old fisherman's Tale : Barracuda, Crimson Snapper, Mangrove Jack
( Basically Big Game Fish)
"Activation"
It was a cool morning, birds were chirping outside the windows and the warm sun rays creept in slowly into the bedroom. Sounded like a perfect morning to sleep in right? Nope!! You were wrong! It sounded like a perfect morning to get up to go fishing. We were woken up by the ringing of my mobile. Wondered who would have tried to reach us so early in the morning? Our dear old friend Sixfaez. Aah!! The angler of the year was what we used to call him. A really nice guy. So he got on the phone with Mogi and the conversation ended with the time and stipulated meeting place. The place of interest for the day would be Yishun Dam. The night before, Mogi and i was surfing through the net and found interesting facts that points to a good sea harvest there. Yup!! We've gone on few fishing trips and the most recent on Tues (10Th Feb). Sadly, none of the trips was fruitful and we leave most the time empty handed. Motivated to have a good day fishing, we excitedly jump into the showers and started to get ready.
"Time Challenge"
Mogi and I reached the meeting place which was at Henry Shop very much on time. As usual our buddy Sizfaez was a little time challenge. Well i don't blame him. Trying to beat the traffic especially during rush hour on Lentor Ave was such a killer. So we browsed around in Henry's while waiting for him. Arrived a little later then we anticipated, we headed to get some supplies and breakfast and made our way there.
"Destination Fish"
Finally when we got there it was almost noon. Much later then our previous plan of reaching there just a little after 10.30am. Anyways the sun was scorching just right above our heads and the heat was unbearable. I know i have been in way hotter weather then this but that day, the heat seems a little too hot to handle. I looked around and cant help thinking that the place still looked the same after so many years. 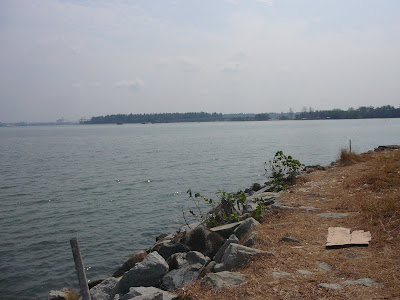 The familiar sight was a bonus. The boys ( Mogi & Sixfaez) was excited looking at the inviting aura that the sea was promising and just like any kids standing upfront of a candy shop would do, we lay our gear on the ground and started to look for our own private spot. I guess this would be our last fishing trip with our bro Sixfaez. He going to migrate to better waters in Australia. Damn!! How i envy him. Australian fisherman is the luckiest in the world to be able to fish all year round. Back to our quest to look for fish, we quickly set up and cast away.

We waited for quiet sometime, gentle tugging can be seen and felt but nothing more then that. The day seems to wither away with us getting agitated and impatient. As we waited under the blazing heat, we spotted an fellow angler squatting near by. I smiled at the uncle and engaged in small talk. Found out that the uncle was waiting for a boat to arrived as he caught a big sting ray (probably 25kg from the looks of it.. i forgotten to ask how heavy..) 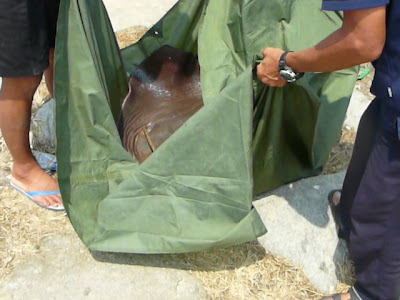 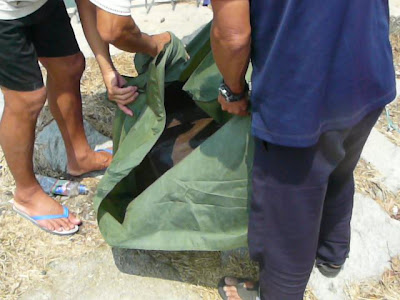 He was quick to warp up his "big " catch. I guess he's a little modest in showing it off to us. It was a really big catch. Sigh!! I'm still waiting for my day to come when i land a catch as big as his, i hope bigger maybe a 30kg off, well any fish I'm not picky. He must be ecstatic. I asked him what bait he used but he didn't answer. Guess i must have sounded like a nosey reporter or that he was just busy at the time of questioning.

" Waiting Game"
We played the waiting game all the way till about 5pm. No news and no bites at all. It was strange though. Every time we reel in to check on our baits, part of it was gone and it only makes us even more agitated then before. We decided to pack and make a move when out of a sudden my rod made a sharp bent. It went again for the second time and this time it bend all the way down. One look at the rod and I'm sure that it would just gave way and broke but it didn't. Mogi who was closest to the rod acted on his instinct and gave a hard tug. My 30lbs line bust and all was left was my swivel at the end of it.The oohs and aahs coming from nearby onlooker. I gave a sharp look at Mogi. You could see the " shooting dagger look" i gave him. Yes i was mad!! Mad that when u helped me to cast my line, he had forgotten to turn on the drag and resulted in the busting of my line. Arrggghhhh!!! it WAS A BIG FISH!! all of us knew it. Lesson learnt for Mogi. ALWAYS CHECK THE DRAG!! 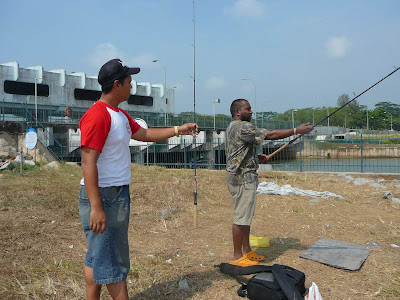 "Walk Of Shame"
We tried again casting at the same place and waited for another hour but to no avail. The day was ending and we have grown tired . The waiting game has taken its toll. We then decided to pack up and leave. We had to walk our way out from the dam and all through out the walk we were discussing what it could have been. We bid farewell to Sixfaez and headed on our separate journey. I keep nagging at
Mogi for not turning on the drag. I could understand his frustration but Mogi have never been a firm believer in using the drag but i guess he must have learnt the lesson the hard way. I couldn't stop thinking about the way my rod bent. The visual was so disturbing that i doubt i would have a good night sleep.
Posted by Mrs Momogi at 10:21 PM

Speak Or Forever Hold YOur Peace!!